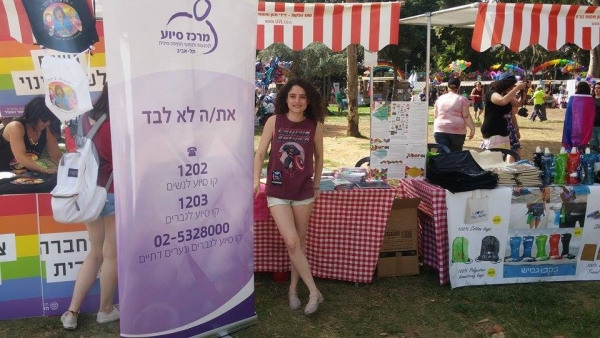 Included in each of the Center’s broad spectrum of programs is the goal of raising awareness within the target community. This includes our more generalized work as well as our projects with specific sectors of society or professional groups. We make sure that all program participants are exposed to the larger issue of sexual assault and galvanized to create lasting change in their communities. In numerous instances our staff has been fortunate to witnessed extordinary evolutions in regards to community views of sexual assualt as a direct result of our efforts.

The Tel Aviv metropolitan region is known for its thousands of bars, clubs and resturants that cater to its bustling nightlife scene. Unfortuantely, there has been a rise in incidents of sexual assault as this lively subculture has expanded. In reaction to this disturbing trend a group of community members, including clubbers, bar owners, club proprietors and staff members approached the Center requesting help in dealing with this growing problem. In turn, our staff members and volunteers intitated an extensive community outreach and a large-scale public campaign.

Through our work we have been able to raise awareness of this issue and take significant steps to establish preventative measures. These measures include trainings for the bar\club staff members on how to address incidents sexual harrassment and assault as well as dozens of lectures at establishments throughout the area that have reached hundreds participants. Community members were so pleased with the results of our programming that they requested that the Center help them to draft a Code of Ethics for owners and operators of Tel Aviv’s bar scene. This code obligates the signatories to make the necessary steps, which includes staff training through the Center, so that their nightclub environment is safe as well as to take the proper measures to deal with incidents of sexual harassment\assault in order to ensure that everyone can drink, dance and socialize freely without fear. Many high profile club, bar and resturant owners have already signed the code, icluding: The Block, Anna Loulou Bar, Bootleg, Shpagat, Teder, Biggy Z, Breakfast Club, Pasaz and many more. 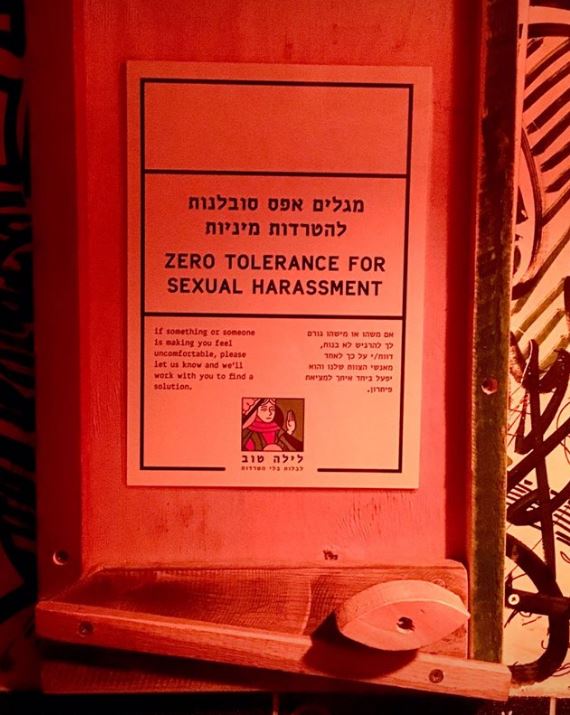 Statistics show that one out of three Israeli women will experience sexual assault and one out of five Israeli women will experience rape in their lifetimes. Up until the age of 12, rates of sexual abuse are similar for girls and boys: one out of six children will suffer from some type of sexual assault. Despite the ubiquity and severity of this phenomenon, most victims of sexual assault still avoid reporting what they have been through.  Fear of judgment by both loved ones and institutions is one of the main factors that prevents survivors from coming forward.  They are often blamed and their credibility is doubted and put into question—treatment that is unique to victims of this particular crime. Feelings of loneliness, shame and detachment from society are often inseparable for those who have experienced sexual assault. Less than 15% of sexual assault victims who reach out to the Center end up filing an official complaint to the police.  As a result, many stories remain untold in both public and private spaces.

A few months ago, an 80-year-old woman contacted the Center. For the first time in her life, she told her story of being sexually assaulted as a child. “I can’t take this story with me to the grave,” she said. She wanted to lift the burden of this secret from her shoulders, and asked only for someone to listen.  This incident inspired us to begin the Testimonies Project in order to help silenced survivors of sexual assault liberate themselves from their hidden traumas, and to include their voices in Israel’s collective story.  Researchers who specialize in narrative treatment emphasize the therapeutic importance of documentary projects, especially in regards to stories that are often judged critically and silenced by society as well as by the survivors themselves. 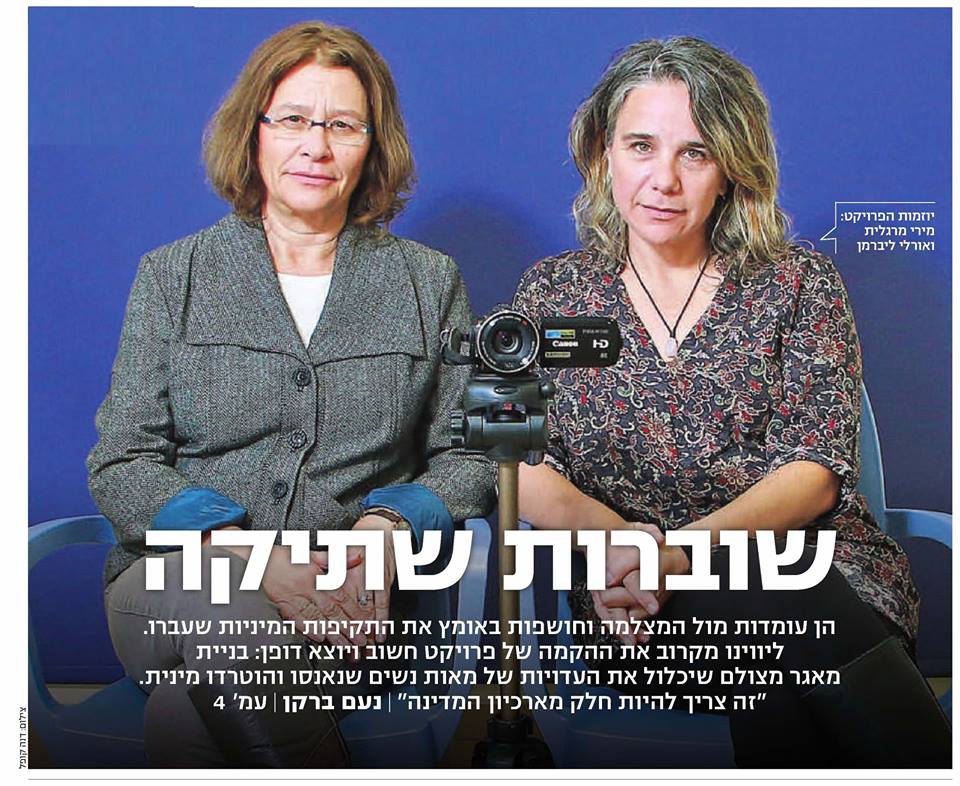 The project is designed to help end the silence around sexual assault and allow victims to raise their voices and share their stories within a safe space. On an individual level, we have found that breaking the silence is a necessary first step toward dealing with and recovering from trauma. Giving voice to victims strengthens them and ends the self-blame and emotional damage they may have suffered as a consequence of suppressing their stories.  Documentation also serves as a tool to show victims that they are not alone in their suffering. The stories collected through this project demonstrate parallels in victims’ journeys and feelings of vulnerability, loneliness and internal struggle. The courageous women and men who share their stories become examples for others: they show that they survived and reclaimed their lives. However, this initiative is important not only in its healing capacity but also in its ability to give legitimacy to victims’ narratives. This project encourages the people that define this crucial discourse around sexual violence to contribute their experiences. The survivors and their stories are received with acknowledgement, empathy and respect.  For many survivors this is the first time that they feel that they have received any emotional acknowledgement or validation of their experience.

Our project aims to provide a safe space for unofficial testimonies. Moving the discourse around sexual violence away from restraining and restricting places, and into supportive spaces. Currently the conversation about assault takes place in three main locations: police stations, court rooms and therapy offices. Society is often unwilling to listen to these complex stories and acknowledge the widespread phenomenon of sexual assault. This project creates a discreet, confidential environment for victims to give their testimonies without having to undergo investigation and criticism.  Additionally, the project fosters a partnership between storyteller and witness. Most reactions to stories of sexual assault involved rejection and judgment. Giving testimony through this project will be a corrective experience for many who share their stories: the listening party will be accepting and attentive, and serve to validate the survivor’s experience.  Moreover, the project builds a heritage of “her-story.” Achieving institutional recognition of the importance of personal stories told firsthand by women. The subjective experience of the victim is positioned within the socio-cultural context that enables sexual assault—therefore, the personal is political, and stories have incredible potential to redefine discourse around sexual violence in our society. Through this project, we aim to consciously place stories within their historical/social/cultural context.  The Testimonies project also has the added dimension of contributing to research and study in the field of sexual assault treatment. Collecting and documenting a wide range of stories of sexual assault will help create a body of knowledge for research of this issue. Witnesses will maintain the highest standard of confidentiality while documenting stories. In order to ensure ownership of their story, each women decides individually how their testimony will be used- whether she wishes to receive a copy of the footage, if it will be used for education, research or public awareness or even if she wishes to leave directions that her loved ones will only view the testimony after her death.  Only the testimonies of survivors who agree to contribute will be made accessible for insight and study.

Over the past year, we conducted a pilot for this project—recording the stories of 11 survivors. Participants gave overwhelmingly positive feedback, many noting that the personal impact of sharing their stories exceeded their expectations and left them feeling empowered.  Having experienced success in the pilot, we now plan to reach out to survivors by widely publicizing this project throughout communities in Israel’s Central region. We will record as many survivors as possible, aiming for an archive of thousands of stories.  Following the pilot, Israel’s largest newspaper, Yediot Achronot, did a major feature story about the project in their paper and we received hundreds of calls from survivors who are interested in participating.  In reaction to these calls we are expanding the program and have opened the project up to male survivors as well.